Théa is an independent pharmaceutical company specialized in the research, development and commercialization of eye-care products. 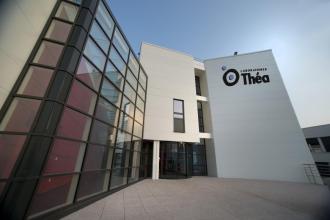 Théa was set up twenty years ago and has played an important role in the latest pharmacological advances. Today, it is the leading independent eye care group in Europe.

Based in Clermont-Ferrand, the laboratory has continued to expand by opening nearly 25 subsidiaries in Europe, Russia, North Africa and South America. Currently, the Théa group constitutes a network uniting more than 900 members of staff worldwide, with its products available in more than 70 countries.

Théa is an independent family group, developed from a Research and Development start-up by Henri Chibret, a fourth generation member of an ophthalmic dynasty. Jean-Frédéric Chibret (a fifth generation family member) has presided over the company since 2008, with Henri Chibret remaining at the head of Théa Holding focused on developing the scientific and financial strategy of the group.

The group is now the leader in several therapeutic classes as well as in the field of preservative-free eye drops. Théa aims to meet the full needs of all ophthalmologists, no matter how they operate or what pathology they are treating, covering the main therapeutic classes. From well-known classics to innovative treatments, in the areas of diagnosis, surgery and therapeutics, Théa offers a complete range of modern products.

In the medium / long term, Laboratoires Théa will:

■ Complete its range of products to satisfy the full needs of all ophthalmologists.
■ Remain receptive to ophthalmologists comments, whether they be researchers, surgeons or medical doctors, and to maintain close links in order to better satisfy their needs and identify areas of innovation.

In the coming years, Laboratoires Théa have several objectives:

■ Innovation: to pursue research in order to develop innovative molecules and means of administration for eye care products, so strengthening Théa's position as leader in the field of preservative-free eye drops, a domain in which the company was a groundbreaker.

■  International: to expand and strengthen its presence in the world beyond Europe, where Théa already has a strong footing.

■ Education: to support the sharing of knowledge, especially towards young ophthalmologists.

■ Quality: to ensure that the values of hard work and quality are perpetuated, as it is on this sound basis that the reputation of the Chibret companies has been built over several generations.